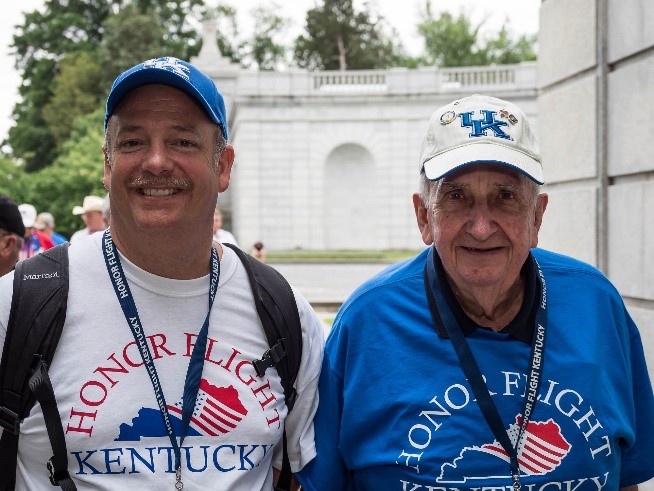 Honor Flight Kentucky Board member Evan Goldey became involved in the organization after serving as a guardian for his father-in-law on a 2017 flight. Upon his return, he was so impressed by the experience he immediately knew he needed to be involved in HFK in some capacity, initially signing up to serve as a volunteer guardian. As his participation increased, he had a desire to do even more and sought the involvement of his employer, Lexmark International, initially to assist with printing needs. This led to Lexmark proudly sponsoring the Homefront Heroes event, a special day focused on spouses of Veterans who participated in an all Vietnam flight in the fall of 2018.

“Although I have never served, I am proud to be associated with Honor Flight Kentucky and honored to give back to generations of Veterans who have laid the foundation for the freedoms we enjoy each day”, he stated. “It is my privilege and desire to help the organization grow and raise awareness so all qualified Veterans have the opportunity to be recognized for their service. They are our greatest heroes and deserve nothing less.”

We’re ready to get the 2023 flying season starte

We are pleased to welcome Gen. Ben Adams III (Ret.

Many thanks to students at Shannon Johnson Element

On Veterans Day, Honor Flight Kentucky thanks the

Honor Flight Kentucky is an official hub of the Honor Flight Network. Trademarks and Copyrights are the property of and are used with the permission of Honor Flight, Inc.

Honor Flight Kentucky is an official hub of the Honor Flight® Network.

Trademarks and Copyrights are the property of and are used with the permission of Honor Flight, Inc.